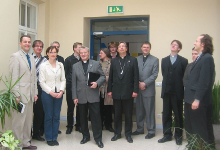 The Institute of Theology of the Estonian Evangelical Lutheran Church (Estonian acronym: EELK UI) is a private higher education institution in Tallinn. Most of the current clergy of the Estonian Evangelical Lutheran Church, a mainline Protestant Church in Lutheran tradition, have acquired their higher theological education at the Institute. The Institute consists of the Faculty of Theology, the Church Music Department, the Continuous Education Department, and Pastoral Seminary. The Institute also possesses one of the largest theological libraries in Estonia.

The Faculty of Theology is the largest unit of the Institute and considers itself as a successor of the Lutheran Faculty of Theology, founded in 1632 at the University of Tartu, which was closed by the Soviet authorities in August 1940. The history of the Institute can be divided into two periods – from its establishment in 1946 until the extinction of Soviet power in the late 1980s, and from the restoration of Estonia’s independence to the present day.

The Institute of Theology (which also carried the name Higher Experimental Commission of Theology in between) was established in 1946 under the conditions of Soviet occupation which did not foresee theological studies at public universities and higher education institutions. The Institute may this be regarded as the oldest continuously existing private higher education institution in Estonia. The initial student body consisted of former students of the Faculty of Theology at the University of Tartu. Also the curricula followed to a large extent the ones from the Faculty of Theology on Tartu, and some of the professors who were also active by the opening of the Faculty, had previously been teaching at this Faculty (e.g. Uku Masing) or had graduated from there (e.g. Evald Saag).

Significant changes in the life of the Institute began in the late 1980s, when Soviet power began to collapse. The number of students multiplied. Under these new circumstances, there was a much higher demand for theological higher education. In early 1990ies, the Faculty of Theology at the University of Tartu reopened, and new applied higher education institutions of theology were opened (two of them carried by Baptist Union and the Methodist Church in Estonia respectively). In early 1990ies, Department for Religious Education was founded, which has by now been integrated into the Faculty of Theology and the Continuous Education Department. In the first decade of the 21st century, the Faculty reorganized its curricula according to the Bologna system, offering the so-called 3+2 years study pattern (3 years for BA and 2 years for MA level). Currently, the Institute has a status of internationally accredited applied university which offers curricula in the field of theology, pastoral care and diakonia.

The Church Music Department was opened in 1953 on the initiative of Hugo Lepnurm, a well-known Estonian composer and organ player whose academic activities at the public Music Academy were put on halt in 1950ies due to his religious affiliation. The department currently organizes church music courses and in-service training.

The pastoral seminary which prepares clergy for the Estonian Evangelical Lutheran Church, was founded in 1995 by Rev. Paul-Gerhard von Hoerschelmann. The Pastoral Seminary offers courses for preparation of future deacons and pastors resp. priests, as well as continuous education for clergy, in cooperation with Continuous Education Department. Successful completion of the seminary is one of the necessary preconditions for becoming a pastor.

Last but not least, the Institute has a significant library, which has grown out of the Consistory library and the old clergy library, located at the Tallinn Episcopal Cathedral. It was later supplemented by inheritances and donations received from abroad, as well as several recent theological publications. Today, the library has over 70,000 items.

One of the goals of the Institute has also been to publish theological study literature in Estonian. These publications comprise both translated literature as well as original works from Estonian theologians.

The deacon course ended at the EELK UI pastoral seminar

The deacon course, which started in the autumn of 2020, ended at the EELK UI pastoral seminar Robert Bunder, a candidate for deaconry, was prepared